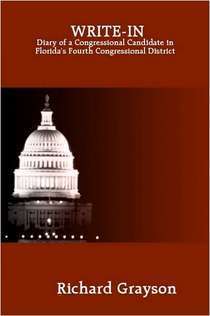 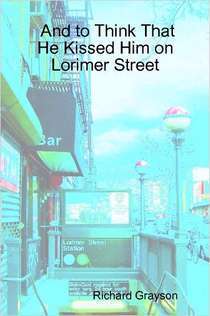 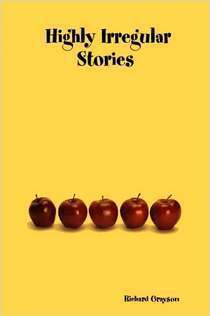 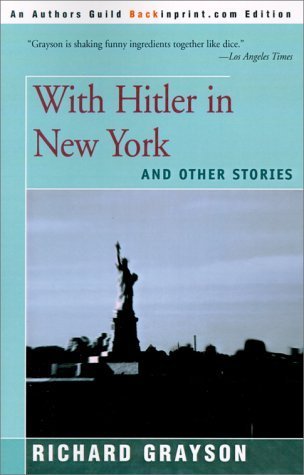 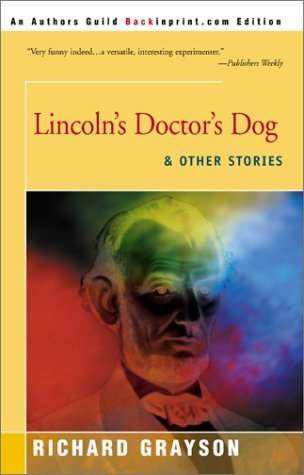 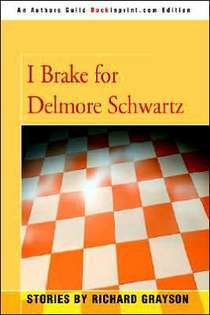 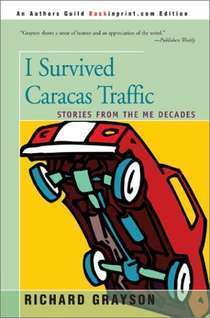 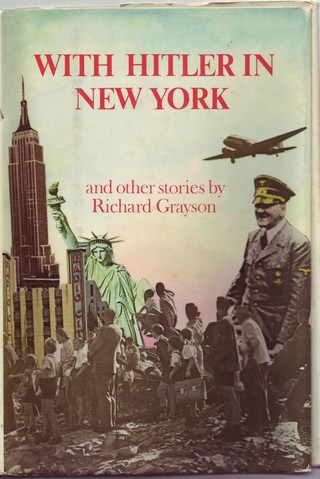 Books:
With Hitler in New York and Other Stories.
New York: Taplinger, 1979.
Paperback reprint:
Lincoln, NE: iUniverse/Backinprint.com, 2000.
"Where avant garde fiction goes when it becomes standup comedy." -- Rolling Stone
"Grayson is shaking funny ingredients together like dice." -- Los Angeles Times
"The reader is dazzled by the swift, witty goings-on." -- Newsday
"Really funny" -- New York Daily News
"Like prose photographs by a paparazzo...quick, conscious attempts to dazzle....An innovative (and talented) comedian...." -- Library Journal
"....shines with intelligence and even wit." -- Cleveland Plain Dealer
"Grayson uses more diverse voices than any writer.... At the same time he maintains a distinctive quality" -- Washington Review of the Arts
"Grayson hashas the wild sense of humor of a 'Saturday Night Live' regular...laughing all the way to the analyst's couch." -- Newsday
"Fictions marked by comic exuberance and sympathy...a bit of extended tom-foolery... particularly appropriate for comedy." -- Bellingham Review
"A dash of New York, a snippet of sadness, a gaggle of goonies....something to satisfy even a wacko." -- Harrisburg Patriot-News

Lincoln's Doctor's Dog and Other Stories.
Adelphi, MD: White Ewe, 1982.
Selection of the Small Press Book Club
Paperback reprint:
Lincoln, NE: iUniverse/Backinprint.com, 2001.
"Grayson is serious and comic, charming, given to outrageous puns, and a sharp-eyed observer of and participant in life's absurdities.... These twenty-two fictions display a versatility which commands attention." -- Best Sellers
"Has the character of both parody and the play that is at the heart of new narrative technique." -- Small Press Review
"This writer is not afraid to take risks, and he can be very funny indeed.... a versatile, interesting experimenter." -- Publishers Weekly
"Grayson has a splendid command of language, he is steeped in literary history, is highly intelligent."
-- Orlando Sentinel Star

I Survived Caracas Traffic: Stories from the Me Decades.
Greensboro, NC: Avisson, 1996.
Paperback reprint:
Lincoln, NE: iUniverse/Backinprint.com, 2002.
"An underground post-modernist who writes comic fiction crammed with details adopted from pop culture and the daily news... “Twelve-Step Barbie” evokes a middle-aged, post-success Barbie trying to make it through a spirit-deadening day. The long title story, a resonant meditation on the themes of relationships, AIDS, and mortality, proves him capable of less self-conscious, more serious (though not less comic) work."
-- Kirkus Reviews
"Mr. Grayson shows a sense of humor and an appreciation of the weird. The costs of survival in the AIDS retrospective title story, and the isolating entropy of depression in 'Where the Glacier Stops' manage to imbue their drained narrators with some emotional weight. On the whimsical side, 'Twelve Step Barbie' sees the doll in a midlife crisis, and 'A Clumsy Story' artfully diagrams and parodies MFA-quality fiction." -- Publishers Weekly
"It's the incessant familiarity of the writer's secret self that makes his world entertaining and bizarre.... The dialogue is consistently, even ingeniously funny.
Mr. Grayson excels at diverting the flow of action so nothing expected ever happens...bright and keenly made." -- New York Times Book Review
"Swiftly drawn characters rendered in sharp paradoxical sentences." -- American Book Review

The Silicon Valley Diet and Other Stories.
Los Angeles: Red Hen Press, 2000.
"Compulsively talky and engagingly disjunctive, the 12 stories in Grayson's ninth collection flash snapshots of gay men in their 20s, 30s and 40s battling it out in an online world. Lighter and funnier than much gay fiction, the stories riff on contemporary consumer culture and introduce sweet, mixed-up characters. Grayson knows New York City -- where many of these stories are set --inside and out." -- Publishers Weekly
"Although memorial services for young men seem commonplace in Grayson's fiction, the stories are not tragedies. They serve up slices of life as we know it right here and now with hate crimes, weight worries and easy money for Internet whizzes....Funny, intelligently written and original. These stories accurately capture snapshots of our culture at a very interesting moment. 'The Silicon Valley Diet and Other Stories' sets out to prove we haven't really lost our humanity under the deluge of technology. And we probably never will." -- South Florida Sun-Sentinel
“Grayson’s ninth collection of stories achieves many goals, and he is clearly a master of the genre....
Wherever Grayson casts his gaze, he manages to isolate panoramas of city and small town life in America from the 60s to the present.... There are many layers to this detailing of the techno-ridden superficialities of our contemporary life with its bar codes, microwave ovens, and cyberspeak.” -- American Book Review
“Uses computer jargon to access the concerns of today’s youth” -- Chicago Tribune
"Humor as dry as the desert and an assortment of nerdy-but-likable Seinfeldian characters...will keep you turning the pages." -- Echo Magazine
"Funny, clever, tightly written...balances neurotic self-awareness with a genuine sense of empathy and humor." -- Joey Magazine

Highly Irregular Stories.
Brooklyn: Dumbo Books, 2006.
"A compilation of Richard Grayson's four out-of-print chapbooks: Disjointed Fictions, Eating at Arby's, Narcissism and Me, and The Greatest Short Story That Absolutely Ever Was. Reading these stories reacquainted me with what short story writing is all about: those magnificient, miniature miracles that occur daily, escape most peoples' notice until they are found, like lost pennies, by writers of great insight and deft skill. Richard Grayson is a wonderfully energetic writer whose prose launches across the page like lightning released from a mason jar. A highly recommended read."
-- Matthew St. Amand, www.matthewstamand.com/nightstand/

Eating at Arby's: The South Florida Stories.
New York: Grinning Idiot, 1982.
"A style equidistant between Hemingway and Dick and Jane." -- New York Times Book Review
"A satirist and parodist so timely that his brothers and sisters may not yet discern themselves in his mirror." -- American Book Review

The Greatest Short Story That Absolutely Ever Was.
New Orleans: Lowlands, 1989.
"Quite possibly the funniest short story writer on the literary scene today, Grayson proves that just being himself, including all that encompasses his many aler egos awash with his self-conscious approach to parody, is enough to keep the reader in a bewildered state of laughter." -- YU News Syndicate

Narcissism and Me. New York: Mule & Mule, 1990.
"Experimental fiction that combines humor with tragic touches to create sympathetic characters-- real people who stumble into the surreal, surreal people who happen to be real." -- New Pages
“Along with Barthelme and Barth, Grayson occupies an important place in the trajectory of experimental fiction, certainly as it's currently being practiced. These stories are endlessly inventive and playful, exhaustive without at all being tiresome, and pack gravity where you least expect it. Eggers owes as much to him as to Foster Wallace. So does Foster Wallace.”
-– www.lowblueflame.com